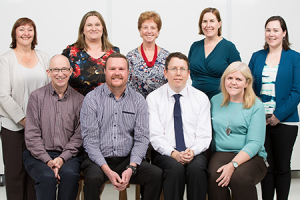 Curtin University’s Reading Lists implementation team was nominated for the 2017 Vice-Chancellor’s Excellence Awards for Professional Staff in the Excellence in Innovation category.

Curtin’s Leganto implementation was the result of a major collaboration between the University Library, Curtin Learning and Teaching and Curtin IT Services.  The team worked closely with other academic libraries in Australia and with Ex Libris to ensure the platform accommodated Curtin requirements.

Since semester one this year, over 40% of Curtin courses have an active reading list with 50,000 citations currently under management and 9,000 citations added in July 2017. The implementation has been an outsatnding success, delivering a seamless, responsive and innovative digital environment to enhance learning and the student experience.

The journey from conceptual idea to reality has taken nearly three years of persistent dedication and effort from the implementation team, and receiving this nomination has been a richly deserved recognition.

Hello New Orleans!! How lovely to see you 🥰

Managing and using reading lists is about to get easier!

Leganto – the new ANU course reading list system – is about to launch for all ANU academics and students in time for Semester 1.

Discover how the #library at @EdinburghUni strengthened its value and impact by streamlining the purchase of course materials with the help of #Rialto & #Leganto: http://ow.ly/EVUq50MzSWG

Have you downloaded our #LibraryMobile app yet?

📱 #RutgersLibraryMobile, powered by @ExLibrisGroup, is an innovative tool designed to enhance your @RutgersU library experience.

It's great to be sponsoring the #NISOPlus23 conference again this year. If you haven't looked at the program yet, take a peek at https://niso.plus/np23schedule/.

ICYMI Big shout-out to @ExLibrisGroup and @copyrightclear - our latest sponsors for #NISOPlus23! Thank you both for your support (and thanks to all the many generous sponsors joining us this year). http://niso.plus/sponsors/